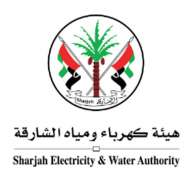 This user has not added any information to their profile yet.

Vision: “To be among the best organizations in the world”
Mission: “Create value and make a difference through teamwork, positive attitude and high standard of service in a fun environment”
On the 22nd of April 2014, H.H D. Sheikh Sultan bin Mohammed Al Qassimi, member of the Supreme Council Ruler of Sharjah, issued an Amiri Decree to restructure SEWA’s hierarchy, by appointing Dr. Eng. Rashid Al Leem as SEWA’s Chairman. And so Sharjah Electricity and Water Authority, with the authentic leadership of Dr. Eng. Rashid Al Leem, started its new journey that travels on unique ideas, creative strategies and hardworking people.
In 2016, the total production of electricity was 2500 megawatts per hour. SEWA is working on improving the five main electricity stations as well as improving and establishing its distribution stations that include: four 220 kilo volt stations, fifteen 132 KV stations, one hundred fifty-five 33KV stations, eight thousand eight hundred and one 11/606 KV stations; SEWA is aiming to improve electricity connections in cooperation with international companies.
There are multiple ways in which SEWA is using to desalinate sea water: MED, MSF, Reverse Osmosis, including the desalination of salty water wells and fresh underground water wells, which guarantees a diversity in water supply for the city of Sharjah. All stations that produce and distribute water are scattered around the Sharjah so that the distribution network covers the whole city; the total water production in 2016 was 110 million gallons and the network line measures more than 3000 kilometers.
Sharjah Electricity and Water Authority has started expanding its use of Natural Gas by using it to fuel forklifts, hotel heaters, hospital boilers and other establishments.
SEWA is putting a lot of effort in spreading awareness to the society when it comes to water and energy conservation and usage with the aim of Sharjah city becoming the “Conservation City”.