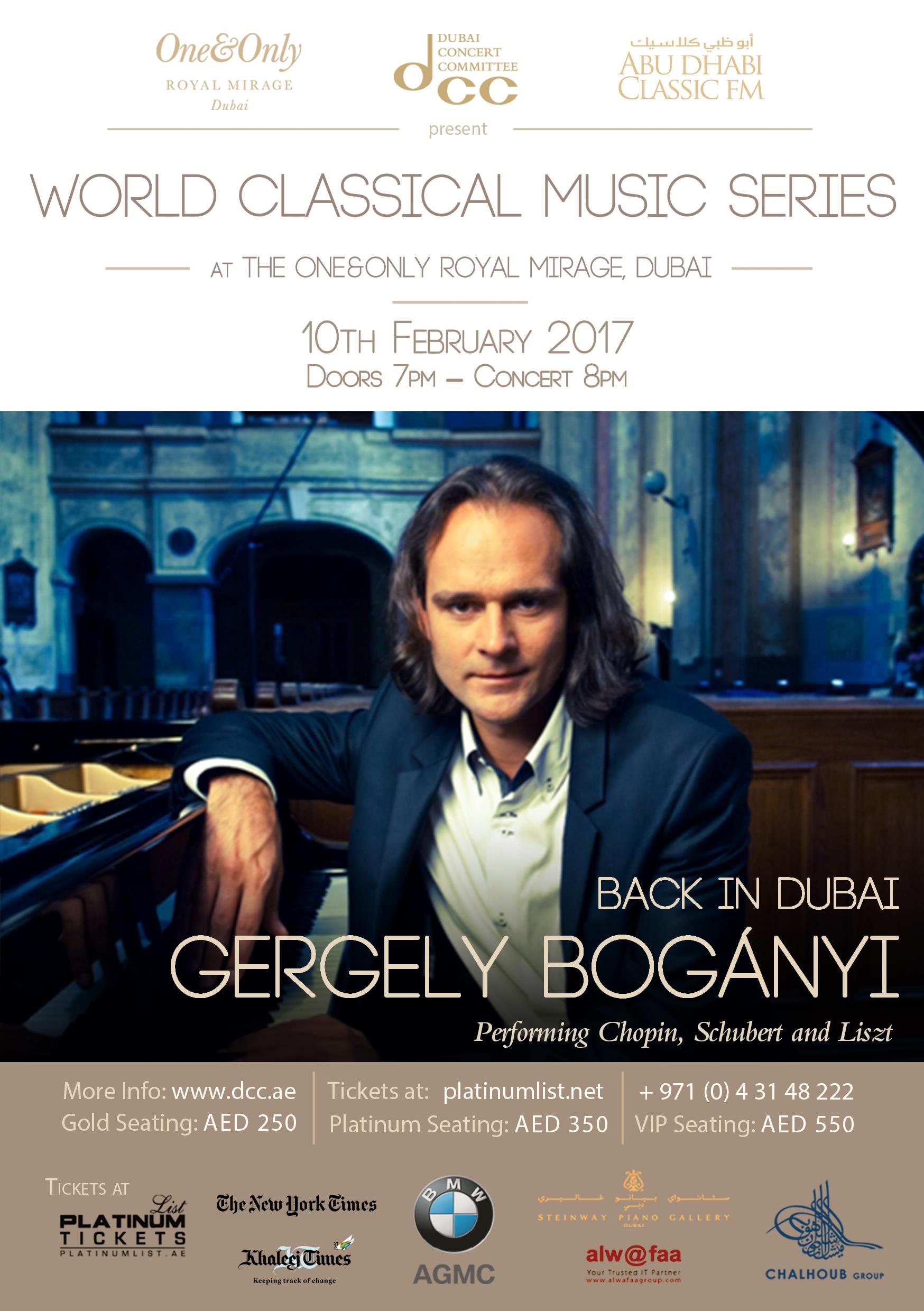 Date: 10th February 2017
Time: 20:00 – 22:00
Location: The Ballroom, One & Only Royal Mirage
On February 10, the famous Star Pianist Gergely BogÃ¡nyi will take the stage of the One & Only Royal Mirage Ballroom performing masterpieces by Chopin, Schubert, and Liszt. Organised by the Dubai Concert Committee, this event is sure to entertain all lovers of classical music.
Doors open at 7pm, concert starts at 8 pm.
https://dubai.platinumlist.net/event-tickets/41276/world-classical-music-series?show=41873
Dubai Concert Committee
About Us
In April 2011 The Dubai Concert Committee was awarded as Supporters of the Arts during the Sheikh Mohammed Bin Rashid Al Maktoum Patrons of the Arts Award ceremony. We are a team of music enthusiasts chaired by opera stage director Brigitta Dagostin, who are driven by our passion for music and our commitment to high quality concerts in Dubai. We have been bringing international professional performers to Dubai since 1996, and are the first organization doing this in the classical area. In January 2014 we have created a new classical music series called “World Classical Music Series” and moved the concerts to the Royal Ballroom of the One&Only Royal Mirage Hotel where the series have been performed since. We have organized over 200 concerts for approximately 95000 lovers of classical music in Dubai.
Gergely BogÃ¡nyi is one of the best known interprets of Chopin and Liszt. His Chopin recordings are history! He won numerous prizes, also the famous Chopin Competition in Budapest and performed in all the major halls of the world. He will mesmerize with his brilliance and his sensible interpretation of the wonderful pieces he selected to perform, just in time for a romantic start into Valentine.
Doors open 7 concert starts at 8pm
Dresscode chic and national dress
Program
Chopin:
– Ballade no. 1 in G minor op. 23
– Ballade no. 2 in F major op. 38
Schubert: 3 Impromptus
– op. 90 no. 2 in E flat major
– op. 90 no. 3 in G flat major
– op. 90 no. 4 in A flat major
——————-intermission—————-
Frederic Chopin:
– Walz op. 18
– Nocturne op. 9 no 2, 3
– Polonaise in A flat Major op. 53
Franz Liszt:
– Waldesrauschen (whispering of the forest)
– Gnomenreigen (dance of the gnomes)
– Hungarian Rhapsody no. 2
For further information, please contact:
Brigitta Dagostin
Chairman, Dubai Concert Committee
+971 (0)506593796 dagostin@emirates.net.ae
/wp-content/uploads/2018/11/Artboard-1-300x193.png 0 0 Austrianbc /wp-content/uploads/2018/11/Artboard-1-300x193.png Austrianbc2017-01-24 10:45:492022-07-25 09:44:48World Classical Music Series Gergely Boganyi

We may request cookies to be set on your device. We use cookies to let us know when you visit our websites, how you interact with us, to enrich your user experience, and to customize your relationship with our website.

Click on the different category headings to find out more. You can also change some of your preferences. Note that blocking some types of cookies may impact your experience on our websites and the services we are able to offer.

These cookies are strictly necessary to provide you with services available through our website and to use some of its features.

Because these cookies are strictly necessary to deliver the website, refusing them will have impact how our site functions. You always can block or delete cookies by changing your browser settings and force blocking all cookies on this website. But this will always prompt you to accept/refuse cookies when revisiting our site.

We fully respect if you want to refuse cookies but to avoid asking you again and again kindly allow us to store a cookie for that. You are free to opt out any time or opt in for other cookies to get a better experience. If you refuse cookies we will remove all set cookies in our domain.

We provide you with a list of stored cookies on your computer in our domain so you can check what we stored. Due to security reasons we are not able to show or modify cookies from other domains. You can check these in your browser security settings.

These cookies collect information that is used either in aggregate form to help us understand how our website is being used or how effective our marketing campaigns are, or to help us customize our website and application for you in order to enhance your experience.

If you do not want that we track your visit to our site you can disable tracking in your browser here:

We also use different external services like Google Webfonts, Google Maps, and external Video providers. Since these providers may collect personal data like your IP address we allow you to block them here. Please be aware that this might heavily reduce the functionality and appearance of our site. Changes will take effect once you reload the page.

The following cookies are also needed - You can choose if you want to allow them: